You are here: Home / News / SuperMoto WA Round 5
Back 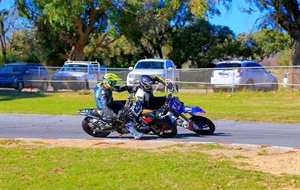 Riders and officials braved a gloomy start to the latest installment of the SupermotoWA Championship Series. The forecast predicted rain, however entrants still put on an action-packed show, with several category winners proving that slick tyres could still take victory on a wet track when paired with copious amounts of skill and bravery. Rider entries were down slightly, with 35 racers entering, yet the club managed to produce fields across Supermoto Open, Clubman, Mini Motard, Posties and Cadets.

Cadets unfortunately had a depleted field and only ran two races. Thanks must be given to Helen Parker and to Steve McQueen for sponsoring the entry fees of both Memphis and Jethro Carriage. The brothers returned from not only the prestigious Penrite Hattah Desert Race, but also Round 3 of the ORCWA Enduro Series in Boddington. The family has been putting some serious time and energy into a wide variety of racing, resulting in two very worn out boys. Jayden Martin rode convincingly on the Aussie Moto Engineering KTM to collect victory in a reduced two-race format. Martin clocked a blistering 1:12.95 lap time around the Wanneroo International Kartway.

Postie Bikes hit the track with four riders, with Gary Aulsebrook retiring with mechanical failure after the first race. The handicap starts, combined with unpredictable track conditions resulted in some sketchy moments on track. Grant Martin and Michael King were unleashed on track some 30 secs behind Gaby Watson (having her own tough day with several spills), however were still able to get around her after an unfortunate final corner incident in the last race. Michael King was able to take victory after a hard fought day with a couple of incidents and plenty of thrills.

Mini Motard saw its share of action as front-runners Lee Johnson and Ben Stevenson fought it out. Stevenson experienced a high speed crash in the final corner as he played the late-braking game with Aussie Moto Engineering-backed rider Johnson. Adriano De Ceglia raced well scoring his first podium in his racing career, behind second-placed Stevenson. Johnson flew to a clean sweep, collecting four wins from four races and elevating himself to 16 victories from 20 race starts. New Mini Motard convert Trevor Gross enjoyed a strong day in the saddle of a new Husqvarna TC 85. Gross brought home a second place in race 2, his best race result in his Supermoto career. Collin Boujos unfortunately was forced to bow out of the event with an injury sustained in the early stages of the day.

Supermoto Clubman was a hard fought affair with an amalgam of Veteran, Womens and Clubman riders in the one bracket. Peter Purdy and Gavin Bayliss qualified within 118% of the top Open lap time and were promoted to the higher category. Third-placed Jacob Meads spent his second weekend in a row on the bike after a recent entry into the Brookton Pony Express 4hr enduro. The runner-up position went to Lars Runnesson on the Honda. Runnesson’s day was characterised by a smooth riding style, pushing him to a great result. Aussie Moto Engineering had yet another rider on the podium, with Dion Cobbin riding well, despite all odds against him. The young entrant had everything stacked against him as he attacked the day in wet conditions, on the freshly rebuilt two-stroke running slick tyres front and rear. The day wasn’t all roses however with Cobbin taking a tumble and requiring minor first aid for a foot injury after the completion of the event. Roger Davies and Phoebe Meads were the lone entrants in the Veteran and Womens categories respectively. Meads was able to remain upright throughout the entire day, despite arriving with a slick tyre combo. Her lap times improved to the tune of almost 30secs as the day progressed.

Supermoto Open was an intense category with several surprises along the way. Jump starts appeared to be endemic among almost every race. Numerous 15sec penalties were meted out to the chagrin of several riders, with widespread effects both up and down the points ladder for the day. Third-placed Tim Boujos showed an alarming streak of bad luck, entering with his slick tyre equipped “dry” bike and his wife Jessica’s wet-tyre combo. As luck would have it, the first three races of the day presented as dry or drying track surfaces, before raining either immediately prior to or during the early stages of the race, resulting in Boujos being completely unprepared for the track conditions. It wasn’t until race 4 that the PANIK Leathers-backed rider caught a break with the wet bike on a still-wet Wanneroo Kartway. Race 4 also saw jump start penalties handed out, resulting in a top order shuffle handing Boujous his only win of the day. Runner up went to the hard charging Rocky Cangemi. Cangemi had a consistent day, starting on the front row for the majority of his races, finishing strongly in spite of a jump start, however he had enough on-track pace to negate the effects of the 15sec penalty awarded to his KTM. Lachlan Hickey looked to record a clean sweep for his maiden SupermotoWA victory until a lapse in concentration resulted in an incident on the way into the esses losing him several positions, however he was able to hold on to overall first for the day. Round 5 was a great come back for Hickey after a poor result in the recent Collie round where the JB Racing WR450 suffered a major mechanical failure and needed to be rebuilt.

SupermotoWA’s Round 6 will be at the Geraldton Kart Club on the 28th and 29th of July. This will be a championship points scoring round and the start point for their Best In The West minor championship. Regular entries close on Tuesday 17th with late nominations closing the following Tuesday 24th with no entries being accepted beyond those dates. The SupermotoWA committee wishes to thank all volunteers, officials, spectators and riders who made Round 5 possible, and hope to see you all back soon!

Further details can be found at the SupermotoWA website:

Dropbox links to interviews with each of our winners: