Round 4 of the Supermoto Championship

You are here: Home / Archive / Round 4 of the Supermoto Championship
Back 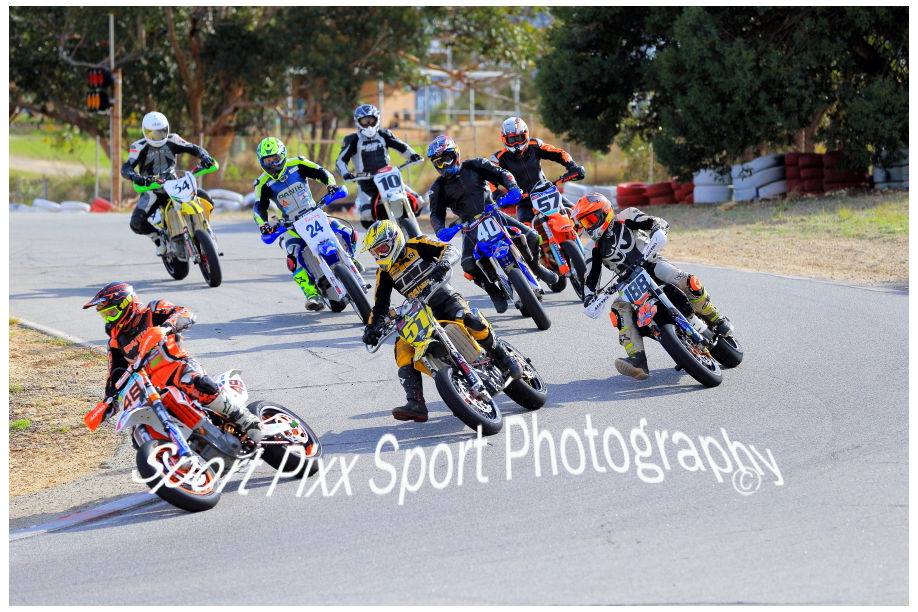 Round 4 of the 2019 SupermotoWA championship was an action packed affair at Cockburn International Kartway!

CADETS:
It was the battle of the J’s, with Joel Jenzen (3rd), Jordan White (2nd) and Jayden Martin (1st) wrapping up the top 3 spots. Harrison Hirst also bagged valuable seat-time as cadets turned laps on a drying track after a brief but solid shower rolled through during Q2, with all juniors opting to cut their second qualifier short to get out of the weather. The current points-score sees the Aussie Moto Engineering backed Jayden Martin in the top spot on 1280pts, with Joel Jenzen on 1111pts and Harrison Hirst retaining 3rd place on 954pts. The top 3 riders have contested all 4 rounds and look to extend their lead over the rest of the field if their current form continues. 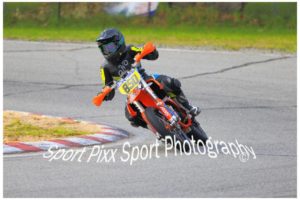 An early 1:00.304 at the close of Q1 had the Aussie Moto Engineering supported Lee Johnson in P1, until a late charge on the final lap of Q2 by Ben Stevenson saw him with a 59.485 and locked into pole position for the start of Race 1. This would set the tone of the battles for the rest of the day, with Johnson and Stevenson taking 2 wins apiece. Omar Gregolin proved to be the fly in the ointment for Stevenson, coming home in P2 in Race 1, relegating Stevenson to 3rd place, allowing Johnson just enough breathing room to hold a 6pt lead at the end of the day. 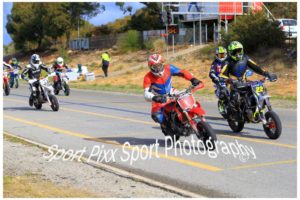 Steven McQueen looked to be unstoppable in the Postie division early in the day, turning a 1:10.591 in Q1 for pole position, before shaving a further .412sec in Q2. By contrast, the next quickest rider was Michael King running a 1:11.089 (+.910secs) on arguably the best appearing bike of the category. The handicap system was in play and created a fantastic spectacle for onlookers as McQueen and King would go bar-to-bar in races 1,2 and 4, not necessarily finishing in the top spots, but adjacent to each other several times as they battled through traffic. Brooke Gentry turned out a fine performance, taking two race wins in the back half of the day. Andrew Chalkley (255pts) was able to hold an early Race 1 victory and come home with 3rd on the podium, with Gentry (265pts) finishing strong in 2nd and Steven McQueen (284pts) winning only one race, however was able to mitigate any rearward movement down the order with great finishes throughout the day. Round 4 was in no way a reflection of the points-score, with Nathan Lammers in 1st (1086pts), Peter Purdy in 2nd (1008pts) and Michael King in 3rd (995pts). 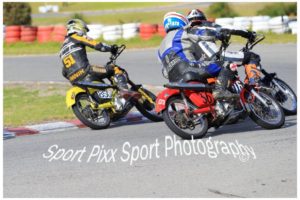 Q1 saw Dan Hughes ready for front row starts with a 1:00.186. Q2 would take place with only three riders and a wet track. Dan Hughes would go on to a clean sweep, defending hard from Jacob Meads, Hannah Stewart and Taavi Viil (running only his second SupermotoWA event). Phoebe Meads would suffer a catastrophic engine failure in Race 3, before borrowing Scott Newcombe’s 450 to contest the final race of the day. The big moment came in Race 4 of the Clubman division with Hannah Stewart pushing hard on the Yamaha and trying to close the gap on Hughes on the run into turn 2. Stewart made the error of over-committing to the move and Hughes remained rock solid as the front tyre of the Yamaha contacted his engine case and Stewart’s bike stood up on its end, ejecting her over the bars before landing perfectly balanced on the bars and seat. To her credit, the young racer showed incredible grit and was able to get the bike fired and complete the race. Hannah would spend a short time with the medics on site before being given the all-clear. Taavi Viil would take 3rd (147pts), Hannah Stewart 2nd (150pts) and Dan Hughes secured 1st (158pts)

Open proved to be the usual highlight of the day as the Jekyll and Hyde sponsored Damon Gibbons would take the trifecta of Top Qualifier, 1st in every race and top step of the podium overall. The fastest lap time would tumble to a 52.815sec and Gibbons was able to maintain an average speed of over 72kmph for most of his qualifying session. Q2 would be a sodden two-horse race with Steven Mcqueen parking the Steve’s Motorcycle’s Yamaha on the dummy grid a full five minutes before being released onto the track with Tim Boujos. Boujos had “borrowed” several parts from wife and PANIK leathers owner Jess in order to have both the wet and dry bike available to use.

Race 2 featured a monumental battle between Steven McQueen (3rd), Scott Newcombe (4th) and Lachlan Hickey (5th). All three riders were toe to toe for most of the race as they lapped on a drying surface in the 55-56sec mark. Hickey would move up the ranks in Race 3 and 4 finishing in 3rd behind Boujos on both occasions. However, a 6th placing for Hickey (237pts) in Race 1 would haunt the young-gun and seal the bottom step of the podium for Steven McQueen (241pts) behind Tim Boujos (288) and Damon Gibbons (320).

Travis Blanke-Cornic (903pts) retains a 23 point lead over Tim Boujos (880pts) after Round 4, with Damon Gibbons (872pts) in third place for the championship.

The next event on the calendar is a Come-and-Try day on the 6th July, with the next Championship round to be held at Wanneroo on the 28th of July! 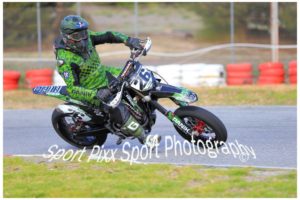