You are here: Home / Archive / Sigismund (Sig) Schlam -Induction into Motorcycling WA’s Hall of Fame
Back 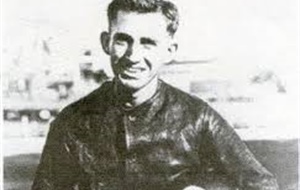 Sigismund (Sig) Schlam was born in Boulder in 1905 and raised in Yarloop where his father ran the local timber mill.

His parents had emigrated from South Africa and sent Sig back to Capetown to study at university after he completed high school – Sig did not complete the course in South Africa and returned to Western Australia where he worked at the Yarloop timber mill before taking up employment at Mortlock Brothers – the leading motorcycle business in the city at the time.

Sig started racing on the grass track at Claremont in 1926. When speedway was brought to Claremont in October 1927 Sig quickly became one the major attractions setting many track records and often being heavily handicapped to increase the spectacle for the 20,000-capacity crowd.

While the first official Australian Championship was not held until 1929 Sig won the 1928 Australian one-mile championship in Adelaide and returned to Western Australia as a hero to his many fans.

Sig travelled to the United Kingdom with a number of other Australians but were misled with a raw deal from the promoter and returned to Western Australia in late 1928 where he proved unbeatable on his Douglas Dirt Tracker winning nearly 50 trophies including “golden helmets” cups and awards.

In addition to many local successes, Schlam won 2 Australian Championships, one at Wayville Speedway, Adelaide, and the other at Claremont.

In the 1930’s with the depression in full swing racing was moved to the WACA ground – On Saturday 1 November 1930 Sig Schlam hit the safety fence in the A grade handicap final after conceding big starts to the other riders due to his dominance. He died in Perth Hospital some hours later leaving a wife and two daughters.

Schlam was regarded by many as the greatest dirt track rider produced in the state and was the dominating figure at most of the meetings at which he competed.

He rarely finished a race anything other than first place and so accustomed were spectators to his winning most of the races that they were known to refer to race meetings as “another Schlam benefit”.

If Sig was ever beaten on equal terms it was a notable event, so great was his skill that he was given the title of the “Trackmaster” – a term which was never applied to another rider in Western Australia.

Sig’s family are extremely proud of their grandfather and uncle’s achievements and are honoured that Motorcycling WA have bestowed the prestigious Hall of Fame induction upon their loved one.

Sig’s racing results and his part in the early history of motorcycle racing in Australia makes him a fitting member of the Hall of Fame.

This year the Motorcycling Western Australia Shannons Insurance Night of Champions is being held at the Esplanade Hotel, Fremantle on Friday 9th of November 2018.

The Shannons Insurance Night of Champions has a whole new feel this year and due to the fabulous success last year, this year’s event is at full capacity.

The formalities will finish approximately 10pm and we encourage everyone to continue the evening celebrating and socialising with family and friends.

We look forward to spending the evening with our Champions, Volunteers, HOF’s , Life Members  and supporters of our sport