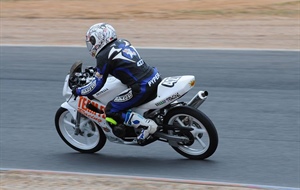 Since the official announcement of the bLU cRU Oceania Junior Cup back in September this year, there has been nothing but support for the new Junior Road Racing Academy.

Born from the desire to develop Australian motorcycle road racing talent, the bLU cRU Oceania Junior Cup received applications from an impressive array of junior competitors from across the country, hailing from nearly every motorcycling discipline including Road Race, Motocross, Dirt Track, Enduro and Speedway. Included in the line-up is a strong representation from four Australian States, two female contenders and a representative from New Zealand.

Motorcycling Australia (MA) officially announced the 26 finalists for the 2019 inaugural season yesterday and MWA’s Pyper Kent is ecstatic to be one of those selected.

Motorcycling WA’s Media Officer, Linda, had a quick catch up with Pyper after the long awaited “bLu cRu Oceania Junior Cup” selection announcement was made

MWA: So the cats out the bag Pyper, your social media personal announcement last week oozed enthusiasm and professionalism, what are you most excited about being part of the bLu cRu Oceania Junior Cup crew?

“I can’t wait to train and become the future me and I’m looking forward to the amazing experience, exposure to awesome tracks and meeting new people in the field of racing”.

MWA: Who is your hero/most admired person in the sport or your most favourite sportswoman that you aspire to be like?

My hero in the sport is Krystal Biffen; I look up to her because she is knowledgeable, talented, kind, willing to share everything with me. I aspire to be as amazing as Krystal. I also can’t wait to meet Tayla Relph.

MWA: How do you think life will change for you and your family next season?

Life will change a lot as we will have lots of commitments outside of WA whilst still trying to hit the Motocross and Supermoto tracks. I will travel so much and see so much. It’s my first year of high school too so everything will be happening at once.

Pyper also added “I would like to thank my current sponsors RS Decals, Race Shield Industries, GoMoto Store, Innesphotografix, Aussie Moto Engineering and BRAAAP Towing, none of this would have been made possible without each of them”.

The bLU cRU Oceania Junior Cup maiden season kicks off with the Official ASBK Test at Phillip Island in February 2-3, before racing commences for Round 1 at Wakefield Park Raceway in Goulburn, New South Wales, on March 22-24. Running alongside the Australian Superbike Championship (ASBK) for 5 of the 6 rounds, the program will introduce the finalists to the highest level of Australian road race competition and exemplify the focus and mentality required to become a true champion.

The 26 bLU cRU Oceania Junior Cup finalists, for the class of 2019 and they are as follows:

On behalf of the Motorcycling WA community we would like to wish Pyper Kent and her family all the very best on their “bLu cRu Junior Cup” journey and the amazing opportunities it will bring to their lives.